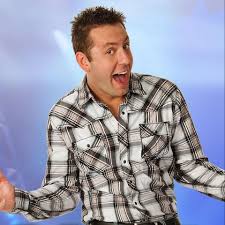 We are beyond excited to welcome back to TL Matt Gumm.  This Family Friendly event is a tips only performance.  This event will be held at the Independence Outdoor Stage.  This stage will be located in the Mini Golf Parking Lot.

Matt Gumm is an entertainer in Branson, MO. He currently performs in the Clay Cooper’s Country Express show as a featured comedian and vocalist. Matt has deep roots in the entertainment industry, born to comedian and vocalist parents Thom & Sandy Gumm. Matt performed at Lake of the Ozarks, MO for many years at both the Ozark Opry and Main Street Opry, and moved to Branson 7 years ago to pursue an opportunity with the Clay Cooper Theatre. Along with performing Matt is also the Graphic Designer for all shows in the Clay Cooper Theatre and leads worship at Woodland Hills Family Church.

In addition to scoring some impressive accolades from Branson-area awards shows for his work in Clay Cooper’s Country Express, Matt Gumm has kept busy entertaining crowds around the country, including keeping folks in stitches at festivals, aboard cruise ships, and at private events. Certainly one of his most memorable moments had to be when he landed the type of gig that’s the opportunity of a lifetime for any comedian…he performed on the epic television show, “The Late Show with David Letterman!”  If you haven’t been fortunate enough to catch Matt perform, you’ll be dazzled by his singing, and laugh yourself sick by everything from his impersonations – these can include Steve Martin, Jeff Foxworthy, George W. Bush, and the host who introduced him to a television audience, David Letterman – to his creative use of musical props, including PVC pipe and a tire pump, and we’re not kidding! In addition to his comic and vocal talents, Gumm is a gifted musician who’s known to play acoustic guitar, drums, harmonica, and the more rarely-seen hammered dulcimer, a percussion-stringed instrument that’s also played by enigmatic Irish singer, Enya, the brilliantly-hued act, Blue Man Group, and Aerosmith frontman, Steven Tyler.